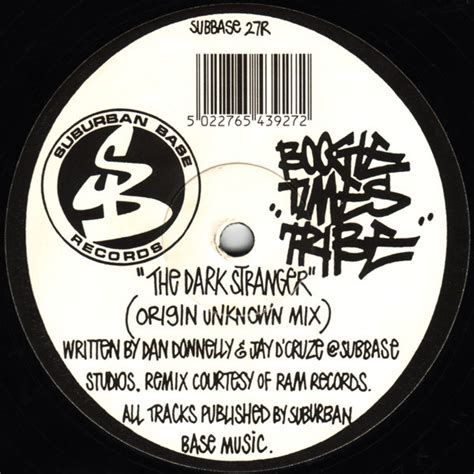 I spent most of the early '90s chasing down one rave compilation CD after another with next to no idea what I was doing. I was just about to turn 20 and I didn't have a lot of cash to throw around. I spent hours in record stores, tortured over which of a handful of CDs I wanted to hear the most.

Rave CDs were a real mixed bag back then. Sub-genres flipped wildly between tracks, shifting from proto-jungle to screaming diva club music to trance. The only uniting element seemed to be the power of samples and a small handful of iconic synth patches and drum machines. I truly was a kid in a candy store.

Then one day I brought home a vinyl copy of Real Hardcore / The Dark Stranger by Boogie Times Tribe. I'd heard proto-jungle by this point. Hell, I'd already worn out my copy of XL's Breakbeat House collection. But there was something different about Real Hardcore. I'd never heard electronic music that fast, for one. 160 beats per minute? Were they mad?

The whole ethos of the single stood out from the endless sugar-high rave CDs I'd been gobbling up for months. For one it was bad, which was a real departure from the "lift me up" vibe I'd become used to in other releases. I mean, I'd heard a few other tracks that tried to cop this bad-boy stance, but it usually came off as ridiculous. (Case in point. Plus the rhythms. What the hell were they doing to those drums?

I'll never forget sitting in my basement listening to this single for the first time. I was a bit confused, but I also sensed I was in the presence of fucking greatness. If only I knew how much my life was about to change. The next few records I bought were the entire Johnny '94 series, Bay B Kane's Forwards In Reverse EP, and Smart E's unforgettable Sesame's Treet.